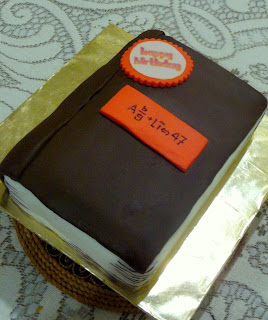 'Bookworm' .. I googled the the word just to ensure I got the correct meaning.
'Bookworm - a person who is fascinated by books that he does not know what is happening in the world' ~ urban dictionary.
Hahaha that's a laugh. Yup .. I kind of agree with this definition....and I will tell you why.
It was 28 December 2010, a rainy season;and most of the employees were away on a vacation.Most of my tasks were completed earlier last week. My clients were barking at me like hungry wolves, chasing me to complete whatever they have requested before they go on leave. My last cake order for the year was on on Christmas Day leaving me hmm .. well how do I say this; I was free and restless.
So as the clock stroke 5.30pm, I swung my lovely black TOD'S and half skipping to the door and walk straight to the nearby shopping mall. I stroll along the shops until I found myself ended up at MPH, one of the best local bookstores in Kuala Lumpur.
I had not read for a long time. The last book I read was by Ceceila Ahern .. 'The Gift'. I bought it in end of 2009 and I even took it to Spain last March ... but I still could not complete reading the book. Hmm yup... I was that hopeless when it comes to reading.
That was last year. Probably I could make another effort; since this it was coming to a new year and everyone would need a new resolution. And my 2011 resolution would be 'read more than 5 books' Ha! That would be good.
So I started to search for a good novel to start with .. as they say... a good start is crucial to ensure that you could reach end of the line. And I went to the section which somehow I knew will never fail me - chick-lit.
I looked at a range of Cecilia Ahern's books and I saw ' The book of tomorrow' .. hmm I have not read that one. Probably I should ... but as I looked further to the left ... there they were, a range of Sophiee Kinsella's novels ... from the Shopaholic series to her one off story novel 'Twenties Girl'. And after long thought, I finally choose the first of the Shopaholic series ' Confession of the Shopaholic'
And that where it started. My addiction to Kinsella's books.
Yup addiction... Funny how it sound but I found that I could not stop reading her books. And when I had completed one, I would feel the urge to buy the next one ... until by end of Jan 2011. I had completed all of the Shopaholic series -- yes ALL of them, until to the Mini Shopaholic; which in total would be 6 novels altogether ... Yipeee! I reached my aim within a month!
Well anyway here it is .. there would always be a side-effect on anything you do which is extra-ordinary and to Niza Umar. This is extra-ordinary. So I ended up lacking of sleep -- which without me realizing, loosing some inches .. (that actually was a positive side-effect :p) and the worst was that my world was separated into two. One of the real existing that I am living in and the other is in Kinsella's world... and that was definitely negative side-effect.
Kinsella's world was a fairy tale... Becky Bloomwood shops like every purchase was a good bargain and her tall charming dark eyed husband would just pay off her debts ... hahahaha yeah right.. in this world there would be no way, I mean no way .. any guy would be as generous as Luke Brandon... and who as loving, forgiving and a go-getter at the same time. But again, that what would be the reason why her books were addictive. It took us all to a fantasy .. away from reality.
Anyway.. I am not a bookworm -- and I do know what is happening in the world; thus I am still in control of my shopping budget and have yet overdrawn any of my credit limits...
Err am I off topic???? ... .:p
at 2/07/2011 No comments:

* Minimum order for cupcakes is 16 per set

Email to nizatulasmar@yahoo.com stating your requirements as below:

1. Type of cake
2. Quantity
3. Type of frosting
4. Cake flavour
5. Date / Time of delivery
6. Design :
i. Theme
ii. Background colour
7. Writings on the cake
You may also also click on the following weblink to fill in / submit your order vide a webform:
http://goo.gl/3ETqu.

Niza Umar -- nizatulasmar@yahoo.com
A mother of four who thinks she came from krypton, who loves to bake and decorate her cakes. HP: 012-2028496